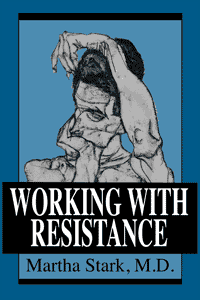 Resistant patients are patients who have not been able to confront the reality of past and present losses, disappointments, and frustrations, who instead protect themselves from the pain of their grief by clinging to their defenses. The resistant patient is a defended patient within whom there is conflict between those healthy forces that press “yes” and those unhealthy counterforces that insist “no.” Such patients resit feeling what they know they should feel and doing what they know they should do.

Working with Resistance integrates concepts drawn from classical psychoanalysis, self psychology, and object relations theory and presents a contemporary theory of therapeutic action that takes into consideration structural conflict, structural deficit, and relational conflict—all of which ultimately both fuel the patient’s progress in the treatment and oppose the patient’s movement toward health and the realization of his potential.

As part of the work to be done, patient and therapist must be able to understand and name, in a profoundly respectful fashion, both sets of forces—those healthy ones that impel the patient in the direction of progress and those unhealthy resistive ones that impede such progress. Before the defenses can be relinquished and the resistances overcome, the patient must come to appreciate his investment in the defenses, how they serve him, and the price he pays for holding on to them.

Martha Stark has always been interested in exploring the relationship between theory and practice—the ways in which theoretical constructs can be translated into the clinical situation. To that end, she proposes specific interventions for each step of the process by which the defenses are worked through and the resistances are rendered less necessary. conflict statements, for example, are empathic interventions that highlight the conflict within the patient between his knowledge of reality, informed by the present, and his experience of reality, informed by the past. It is the internal tension created through the patient’s awareness of that discrepancy that will provide, ultimately, the impetus for change.

Within the context of the safety provided by the relationship with his therapist, the patient will finally be able to feel the pain against which he has spent a lifetime defending himself. As he begins to confront the reality of the parental limitations, he begins to let go of the defenses around which the resistance has organized itself—he lets go of the past, lets go of the relentless pursuit of infantile gratification, and lets go of compulsive repetitions. Only as the patient grieves, doing now what he could not possibly do as a child, will he get better. (765 pgs).

“Dr. Martha Stake is a phenomenon. Her courses in post-graduate education are legend, rivaling in popularity those of the venerable Boston institutions. Now, with this volume, she distills her teachings into an accessible and lively dialogue that captures her inimitable style. Drawing on classical, self psychological, and object relations theories, Dr. Stark’s clinical synthesis broadly defines resistance as those myriad forces that interfere with one’s movement toward health. And, in embedding her concept of resistance in the problems of grieving, Dr. Stark naturalizes the process of therapeutic healing and moves to the essence of what it means to struggle with one’s life. This lovely book is at once both scholarly and passionate—and bears the stamp of a true original.”

“With rare artistry, Dr. Stark succeeds in conveying to the reader not only how a psychodynamic therapy is practiced but how it works. Her writing style conveys the same clarity and steadiness so apparent in her clinical work. Simply but simplistically, she successfully integrates the complexity of the most useful contemporary classical, object-relations, and self psychological perspectives with her rich clinical material. Every page of Working with Resistance is imbued with her personal tact and her deep respect for the patient as a person with choices. Dr. Stark’s crystal-clear thinking woven into the clinical material makes her writing a lucid gem. This book is destined to become a new standard for our field; it is a literary tour do force.”

“Martha Stark is a gifted teacher, able to clarify without sacrificing complexity. No one is better at conveying the essence of psychoanalytic theory, through careful explanation and practical examples. In Working with Resistance Dr. Stark forges a unified basis for psychotherapy, drawing on strengths of the major schools of psychoanalysis. Beyond the rationale and method of our work, Dr. Stark captures its joy.: