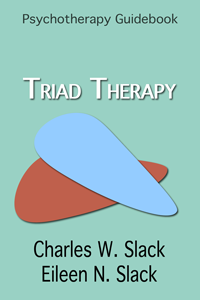 Triad Therapy involves three active social roles in treatment. The triad consists of: those who personify the problem, who have it now — (called P), those who personify the absence of the problem, who never had it or had it so long ago that it doesn’t matter — (called N), and those who personify the solution to the problem, used to have it but now do not — (called EX). Well-balanced triads, professional and amateur, have two therapist roles (EX and N) that can disagree as regards P (and other important issues). Such disagreement is not felt to constitute a disadvantage, i.e., N may strongly feel that P should apply more willpower, whereas EX holds the opposite view that willpower isn’t necessary. The resulting impact of these seemingly contradictory philosophies, however, is to focus on change and to convince P that change both should and will come. (11 pp.)