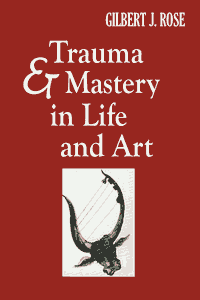 Trauma & Mastery in Life and Art

In this bold and original book, a well-known psychoanalyst explores the parallels and differences between creative and psychopathological responses to traumatic events. According to Dr. Gilbert J. Rose, the wear and tear of everyday life—including trauma and the threat of trauma—causes feelings to be bleached out of thought and perception. Both psychoanalysis and the creative imagination reintegrate what was defensively split off, thereby helping the individual to think and perceive with more feeling.

The author begins his discussion by comparing the childhood of a real-life murderer with that of Dostevsky. He shows that both were traumatized by a strikingly similar childhood memory of seeing a horse beaten, while this experience dominated the life of the murderer, the writer was able to use it as material for creative elaboration. Dr. Rose then compares the creation of imaginary characters in a case of multiple personality with the splitting and reintegration that take place in creative imagination, as in John Fowles’s novel The French Lieutenant’s Woman. Finally, he presents a vignette about a woman whose sense of time became altered following the sudden death of her daughter and demonstrates how this can be related to the altered sense of time in the music of Arnold Schoenberg and Charlie Parker.

With this material as background, Dr. Rose argues that, by different routes, both psychoanalysis and art reinvest feeling into thought and perception and thus broaden awareness. Psychoanalysis, through verbalization, recovers repressed memories and isolated feelings, art, through sensuous forms, undoes the denial of the emotional aspects of perception. Thus each contributes to the ongoing mastery of inner and outer reality. (245 pp.)