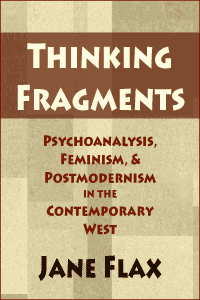 How is it possible to theorize in the contemporary West? With the demise of objectivist notions of truth, knowledge, self, and power, intellectuals have devised new modes of thinking, as exemplified by the development of psychoanalysis, feminism, and postmodernism. These strands of thought both reflect and contribute to the uncertainties of the contemporary West. Each also addresses at least one aspect of what has become most problematic to modern individuals: how to come to terms with self, gender, knowledge, and power without resorting to concepts that stress objectivity, universal knowledge, and a unitary self.

Thinking Fragments provides a brilliant and provocative “conversation” among psychoanalysts, feminist thinkers, and postmodern theorists. Examining the writings of Freud, Winnicott, and Lacan, feminists such as Chodorow, Cixous, and Irigaray, and postmodern theorists such as Derrida, Rorty, Lyotard, and Foucault, Flax evaluates the ways in which each mode of thinking comes to terms with crises in contemporary Western culture. As she analyzes each theory in turn, the other modes of thought allow her to identify and interrogate its constituting gaps and omissions. The result is a postmodern text of intertwined ideas, devoid of clear beginnings, endings, conclusions.

Flax finds that neither psychoanalysis nor feminism nor postmodernism sufficiently addresses questions of self, gender, knowledge, and power. Each can illuminate certain aspects of these problems, but none is adequate on its own. In fact, each incorporates characteristic blindnesses rooted in part in the very difficulties it addresses. Despite their failures, Flax concludes that these modes of theorizing are our best tools thus far, compelling us to used them even while we grapple with the problems they raise.

Thinking Fragments is a trenchant and wide-ranging book that will elicit much discussion and debate. It is an essential text for social scientists and humanists alike, as well as for anyone else who thinks about how to “do” theory in the contemporary West. (pp. 294)

“Flax’s long-awaited book is even better than I thought it would be. There are few scholars—if any—who could bring such a comprehensive, rich, and both appreciative and critical perspective to psychoanalysis, feminist theory, and postmodernist philosophy. Her even-handed attitude toward all three—and the balanced scholarly and practical background she brings to her analysis—is just about unique.”

“Thinking Fragments advances theoretical dialogue across a number of difficult borders. Of special importance is its sustained interrogation of postmodern and psychoanalytic theory from the perspective of feminist theory. Flax’s text helps to bridge the gap between postmodern and feminist theory, a gap which is largely the result of male theorists’ failing to pay attention to feminist currents.”