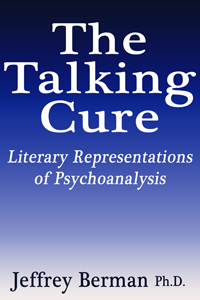 The Talking Cure:Literary Representations of Psychoanalysis

“The talking cure” was the expression coined by Bertha Pappenheim–the subject of the first celebrated case history in psychoanalysis–to describe the magical power of language to diminish mental suffering. From its beginnings, psychoanalysis has inspired countless novels dramatizing the psychotherapeutic process and using the patient-analyst relationship to explore psychological, moral and philosophical questions.

The Talking Cure is a well-written and evocative book that analyzes these relationships as portrayed by modern writers, including Philip Roth, F. Scott Fitzgerald, T.S. Eliot, and Sylvia Plath. The first critical analysis of the ways in which psychoanalysts are depicted in literature, it asks a number of crucial questions: How do creative writers portray psychoanalysis? What is the effect of psychotherapy on the creative process? Which prominent artists suffered psychological breakdowns and later wrote, in however disguised form, about their experience in therapy? Why does Freud continue to fascinate–and in some cases, obsess–the artist?

Of the nine writers discussed, seven have had experiences with mental illness serious enough to require hospitalization or prolonged psychoanalytic treatment, including Charlotte Perkins (“The Yellow Wallpaper”), Joanne Greenberg (I Never Promised You A Rose Garden), Doris Lessing (The Golden Notebook), Eliot, Fitzgerald, and Plath. In a number of cases Jeffrey Berman has uncovered the actual published psychiatric case study that sheds light on the novelist’s portrayal of mental illness and therapeutic cure.

The first major study of the characterization of the psychoanalyst in literature, The Talking Cure is a fascinating book that provides a critical new approach to the portrayal of the patient-analyst relationship, the effect of psychotherapy on the creative process, and the ways in which a writer transmutes case study material into art. (574 pp.)