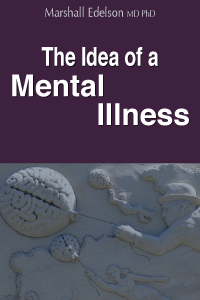 The Idea of a Mental Illness

This book investigates four questions. How does a psychiatrist think about man? What idea of mental illness follows from a view of man as the symbolizing animal? What is the relation of symbolic process and consciousness? How is the treatment of mental illness affected by a focus upon symbolic processes and levels of consciousness? Dr. Edelson’s discussion, using the lecture form, will inform and affect the attitudes of the physician, psychiatrist, psychoanalyst, psychologist, psychotherapist, and student.

Freud, working as he did within the framework of nineteenth-century positivism, imposed physicalistic formulations upon his great empirical discoveries—essentially one great discovery, psychic reality. Nevertheless—and largely because of Freud’s work—today we tend to accept the significance of symbolic process, language, the world of value as well as the world of fact, and the problem of meaning, for understanding man. This book does not contain a systematic reexamination of psychoanalytic theory. However Dr. Edelson suggests some ways in which Freud might have reformulated his explanations of psychological phenomena, given the scientific milieu of our own day.