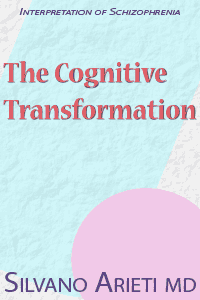 In many cases of schizophrenia the disorder does not manifest itself, at least in its initial stages, with obvious symptoms. Some cognitive alterations may appear to be within the normal range or not distinguishable from those occurring in neuroses and character disorders. Usual psychological tests may also fail to show evidence of cognitive impairment. However, people who knew the patient well can recognize the difference in him. His attitude toward life has changed.