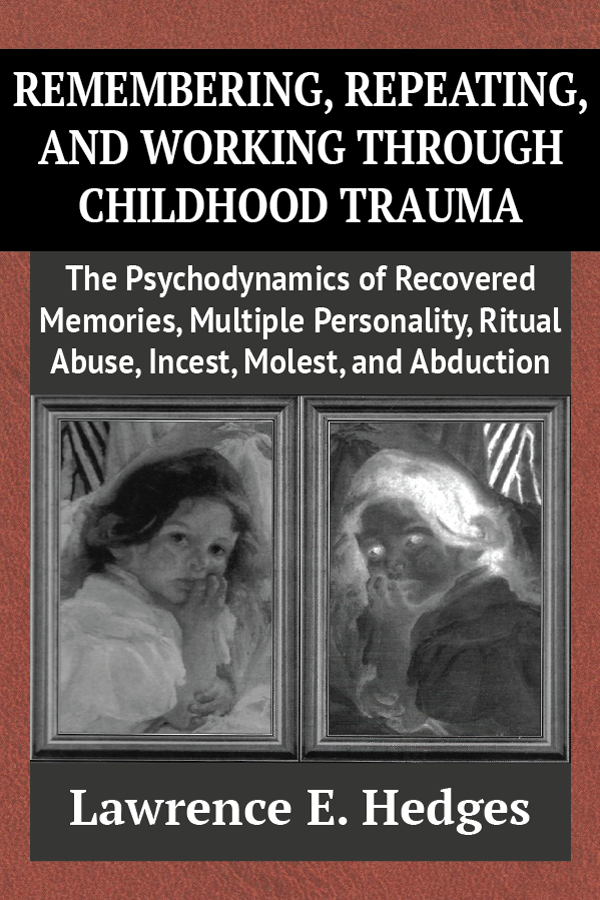 Accusations of child abuse based on memories apparently recovered in psychotherapy, support groups, and similar settings have spurred a national debate. The question most frequently asked is, do these recovered memories refer to real events? This is the wrong question to ask, says Lawrence Hedges, the author of this important work. What is vital is to understand the psychodynamic roots of remembered abuse. Drawing on a century of psychoanalytic study of memory and the way it operates in therapy, Hedges clarifies the misunderstandings and misinformation that currently exist in the media and popular press regarding memory and the nature of the psychotherapeutic process.

Hedges advocates taking recovered memories seriously, which means looking beyond the immediate text of the memory into its psychic origins in early childhood trauma. A person in infancy or early childhood trauma. A person in infancy or early childhood may suffer psychological breakdown or cumulative strain trauma as a result of many different kinds of experiences, such as early illness or hospitalization, the prolonged absence of significant others, early difficulties in feeding or interacting, or stresses due to difficult family circumstances. Such early traumas do not qualify as child abuse. But in the child’s mind the unendurable confusion and pain are attributed to faulty or abusive responses from the environment. When the primordial emotional memories surface years later in therapy, it may be the parents, the therapist, or some other significant person who becomes the target of accusation.

Infantile strain trauma has long been known to leave deep psychological scars that show up as symptoms later in life. The person who senses that there is something deeply wrong inside may undertake therapy in an attempt to define the nature of the trouble and its causes. But since ordinary pictorial and narrational memory are not developed before the third or fourth year of life, other forms of memory are relied on to tell the story in psychotherapy. These may take the form of characterological emotional responses or restrictions in the ways people experience and manage their bodies. Primitive anxieties resulting from traumas that occurred too early in life to be remembered in ordinary ways become condensed into picture of emotionally similar events that occurred later in life and can be more easily recalled. Hedges reviews the many ways in which our memories play tricks on us. He shows how the therapist who is uniformed about the power of transference is likely to collude with the patient’s resistance to transference remembering and thus help the person externalize blame for the experienced trauma onto persons outside the therapeutic relationship and in the distant past.

The cultural themes of incest, cult abuse, multiple personality, past lives, and alien abduction all provide a format or set of metaphors for early trauma to be creatively and effectively elaborated in the therapeutic situation. To merely believe the flashbacks and the memories that people relate in an effort to define and transform themselves in therapy is, in an important way, not to take them seriously.

The incredibly imaginative human mind labors to condense many emotionally similar events, to project these events as pictures onto a psychological screen, and then to endow them with a plausible and vivid narration that can be told and believed. We call the picture and stories thus created “memory.” And because of the subjective emotional impact the images and narrations are bound to have, we feel persuaded that the scenes actually occurred in the way our minds have constructed them. Such memories and flashbacks do not operate like a video recorder but more like dreams, which are effective in condensing emotional truth onto compelling pictures and stories. Memories constructed in this way do tell a certain truth. The job of the psychotherapist is to help unravel that truth and to help patients work through the effects which that truth continues to have on the ways they live their lives.