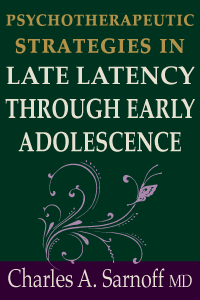 Charles A. Sarnoff, the authority on the treatment of the latency-age child and young adolescents, offers sound strategies and new approaches for therapists who treat early adolescents. This volume explores the normal development of this transitional period and therapeutic strategies useful in confronting pathological wanderings from the normal evolution of adolescence out of late latency. Chapters are devoted to the assessment of normalcy and the therapeutic approach to digressions The relationship between this time of transition and future life functioning is amply explored.

The details of the cognitive changes that underlie the maturation giving rise to early adolescent development is coupled with extended descriptions of concurrent metamorphoses of thought and fantasy content.

In any given child—for mankind in general—late latency and its psychology are harbingers of adolescent adjustment. Indeed adolescence does not arise de novo from the head of the child. Adolescence has roots in latency ego and mechanisms of defense as well as the shaping influences of the world in which the late latency child lives. In this book one will find a carefully marshaled set of facts, observations, and theories that set at rest the idea that the relationship between latency and adolescence is one of accidental succession.

This demise of play symbols (ludic demise) as a tool of drive discharge, the ascent of organs that seek partners, the conversion of daydreams into future planning, the end of inward turning of interests, and the move from narcissism to object seeking are sought out and their stepwise development displayed in these pages. The influence of latency on adolescent adjustment and pathology are described and its assessment and ensuing psychotherapeutic strategies are presented in extended chapters with clinical case illustrations accompanied by supervisory comments.

Dr. Sarnoff draws on his years of experience as a child therapist and supervisor in a way that makes this volume a rich source of illustrative clinical vignettes accompanied by supervisory comments. He has carefully demonstrated that the developmental features of the transition from latency to early adolescence have marked implications for adolescent and adult functioning and hence for dynamic theory and clinical practice.

“In this volume, and its companion work, Dr. Sarnoff has presented a developmental psychology of the period of transition between latency and adolescence. This psychology offers background information for psychotherapists who devote their attention to the late latency-early adolescent years. This is developed in material on assessment and on the technique for developing psychotherapeutic strategies utilizing the background material in the book.

In the process, Sarnoff has broken new ground in the understanding of the relationship between latency and adolescence. The orientation that has seen little more relationship between the two periods than that of consecutive occupants of the same hotel room has been replaced with the idea that there is a transitional developmental phase between latency and adolescence with its own cognitive transition, pathology, and impact on future adjustment. The metamorphosis that takes the child from his status as a home bound caterpillar in latency to the brightly colored butterfly of adolescence who is testing his wings and is ready to fly is presented in detail. What results is the delineation of a newly defined and richly detailed developmental period, where before there had only been some traces in the void and those buy dimly seen.

Among the topics covered are the maturational growth of symbols, adolescent masochism, narcissism, and omnipotentiality, the development of object relations and the capacity to fall in love, extensive case summaries, some with supervisory glosses, and a reflections on his developmental phase of transition that places within it many of the wellsprings of adult character.”