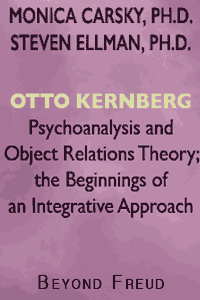 Otto Kernberg:Psychoanalysis and Object Relations Theory: the Beginnings of an Integrative Approach

Otto Kernberg has presented the most systematic and wide-sweeping clinical and theoretical statements about psychoanalysis, for of the last decade, perhaps even since Freud. His work touches on many if not most of the topics that have been of interest to contemporary analysts. In addition, he has been instrumental in introducing many topics to the American psychoanalytic community. Kernberg has been strongly influenced by Kleinian concepts, however, there is also no question that he is attempting to integrate many different parts of what is called the British object relations school, as well as aspects of Freudian thought, ego psychology, and different strands of research in neurophysiology and physiological psychology. This list is by no means complete. Kernberg is strongly interested in research in affect, for example, whether from psychoanalysis, physiology, or academic psychology.