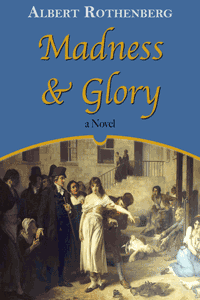 Phillipe Pinel, the doctor who became the world’s first psychiatrist, struck the chains and shackles from the mentally ill in the midst of the French Revolution. Patients were living in hideous conditions, exposed to the public as freaks, and received no useful treatment. A patient in the Bicêtre asylum/jail, former ministerial assistant Guillaume Lalladiere, manages, unchained, to escape. Hiding from hospital attendant pursuers in the streets at night, he inadvertently learns of a plot against the leaders of the Revolution. He goes through the rebellion ruled streets of Paris and tries to give warning to responsible government colleagues and others but no-one except Dr. Pinel, when Guillaume is returned to the hospital, believes him. With Dr. Pinel’s treatment, as well as the support of Genevieve, Guillaume’s love, and Jean-Luc, a canny young boy, he improves. But the plotters learn he has confided everything to Dr. Pinel and both are threatened with arrest and death. (332 pp.)