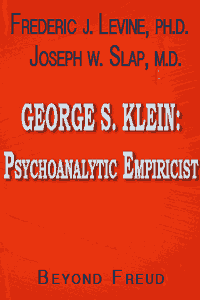 In reviewing Klein’s odyssey from research to psychoanalytic theorist, certain themes consistently appear. First is Klein’s energy, innovative talent, and leadership ability. A second theme is the persisting influence of his academic psychological studies of perception. These became the vehicle through which he first expressed his interest in the ego’s autonomous role in directing behavior, in contrast to theories stressing needs or drives as the main controlling forces.