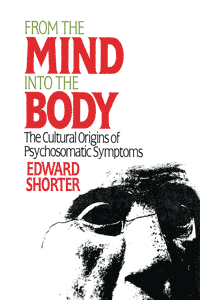 From the Mind Into the Body

Psychosomatic illness has no apparent physiological cause. By definition, it originates in the mind. But now, in this fascinating work, the foremost authority on the history of psychosomatic illness shows that the forms it takes are in fact a product of something much larger. Symptoms are produced not just by an individual’s psychology, but also by one’s genetic history and even by the time and culture in which we live. When we fall ill with psychosomatic pain, our symptoms most often–and quite unconsciously–reflect our particular ethnic group, age, class, or gender.

In this landmark work, Edward Shorter continues his important inquiry into the nature of psychosomatic illness. Drawing on a vast array of engrossing, colorful, and often humorous historical case studies, he explores the newly discovered relationship between social identity and the varieties of psychosomatic disorders.

Tracing the interplay of cultural and biological factors in psychosomatic distress, Shorter shows that while some individuals are genetically more predisposed than others to develop chronic illness, their particular historical era and circumstances will influence the likely nature of their maladies. Women have more abdominal problems than men. Easter European Jews have more nervous disorders than other ethnic groups. Boston Irish tend to experience their distress in their faces and throats, while Boston Italians have more general malaise. Adolescent middle-class girls are most prone to anorexia nervosa. An extraordinary number of fashionable wealthy people became invalids in the early part of the twentieth-century and spent their lives traveling from spa to span in search of a cure.

Shorter explains how symptoms are forged by a number of factors, including the stress caused by changing patterns of family life and by patterns of persecution and the influence of the medical community and the media, which position some symptoms as more acceptable than others. His lively anecdotes reveal for the first time just how stress, popular notions, and social forces together construct many of our symptoms and create much of our pain. (374 pp.)

“This volume caps Edward Shorter’s magisterial work on the cultural history of psychosomatic disease. By means of sharp anecdote, tough scrutiny of primary sources and cogent reasoning, he convinces us that it takes both nature and nurture–genes and culture–to construct the syndromes we have called neurasthenia, melancholia, hypochondria, or anorexia nervosa. Shorter’s books should be required reading for doctors and patients alike, they are a tonic of sweet reason for those afflicted by the fashionable diseases of psychobabble.”

“I take my hat off to Shorter for his dedication, originality, and curiosity. He has a mind to see thing that other historians overlook, so that reading him is like a voyage into strange and uncharted waters. From the Mind into the Body deserves wide circulation, not only among historians and psychologists, but also among the general public.”

“Expertly analyzing a wealth of fascinating case studies, From the Mind into the Body throws historical light upon the enigmas of psychosomatic disorders. Shorter’s work constitutes our most comprehensive historical investigation into the cultural determinants of sickness.”

—Roy Porter
Wellcome Institute for the History of Medicine