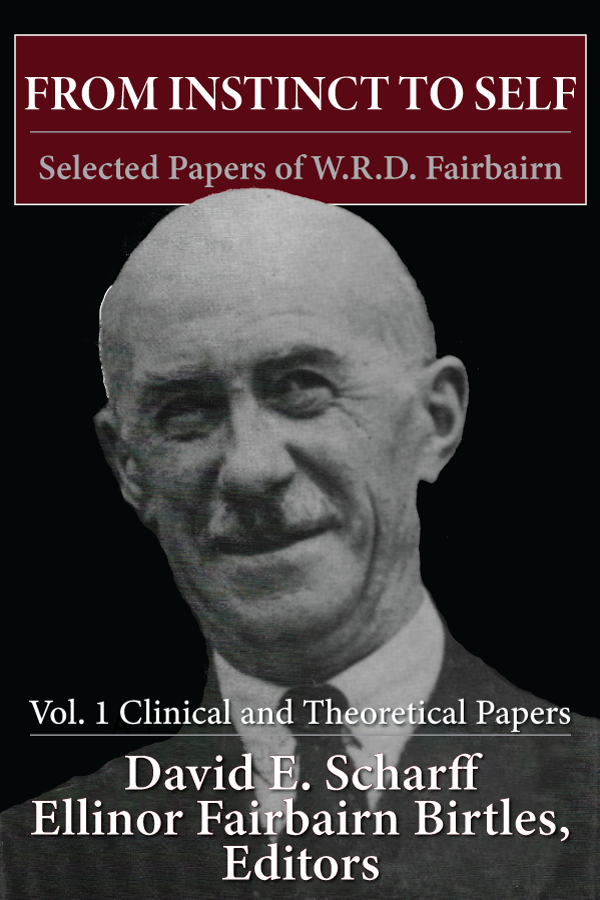 From Instinct to Self: Volume I

Ronald Fairbairn’s theory of object relations, first published in the 1940s, revolutionized psychoanalysis. Countering Freud’s view that the developmental drive emerged almost solely from within an individual, Fairbairn argued that each person’s fundamental need for relationships organizes development and its vicissitudes. In the ensuing years, frequently without attribution to Fairbairn, object relations theory became central to psychoanalytic thinking and source for modern infant research, relational theory, the study of dissociation and multiple personality, psychoanalytic family therapy, and the technique of psychoanalytic therapy.

Fairbairn’s theory drew on his own wide-ranging experience, unusual for his time, which included degrees both in philosophy and medicine at Edinburgh University, where he later taught philosophy and medical psychology from 1927-1935. His through reading of Freud and his clinical experience with abused children, sexual offenders, and war neuroses as well as neurotic adults, provided the basis for reorienting psychoanalysis to the study of relationships. At the center of Fairbairn’s theory is the concept of dynamic internal relations between the self and its objects that give meaning to experience. Fairbairn though that infants deal with frustration, rejection, and trauma through introjections and splitting of the object. The resulting matrix of dynamic internal relationships, part of every human being’s makeup, profoundly influences behavior and interpersonal interaction in the outer world.

Volume I of this two-volume set contains Fairbairn’s previously uncollected major papers, which are characterized by flexibility and depth in the application of object relations theory to the clinical situation. The papers of theory and scientific methodology show rigorous logic in the exploration of the scientific underpinnings of psychoanalysis and of the issues posed by the substitution of an object relations view for Freud’s classical theory.

7 comments on “From Instinct to Self: Volume I”