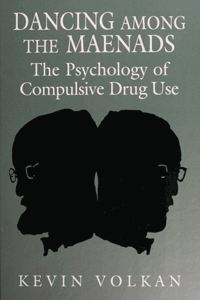 Dancing Among the Maenads

“Dancing among the Maenads’ is a sound, well-organized, scientific and creative study of the psychopathology of compulsive drug use. Largely based on evidence obtained in case studies,… this unusual and appealing book speaks to the myriad of complicated, pre-oedipal urges drug usage seeks to permit expression to, the complexity of intra-psychic and interactional psychological phenomena related to drug use by individuals of varying levels of development, and its effects on one’s interactions with other individuals and society. A special aspect of the book is its use of data obtained from reports and suppositions found in the media concerning drug-addicted folk heroes,…famous autobiographical studies, and mythological drug users. The book makes a strong case for questioning the current popular emphasis on the biology of drug use.”

“Volkan presents a well researched overview which covers 40 years of existing psychoanalytic theories of drug use and addiction…this is a respectable contribution to the series ‘The Reshaping of Psychoanalysis from Sigmund Freud to Ernest Becker’.”

“This book is an important contribution on a number of different levels. First, it provides a relational perspective on drug addiction, second, it explores the problem of addiction in depth, third, it connects character problems with ramifications for treatment.”