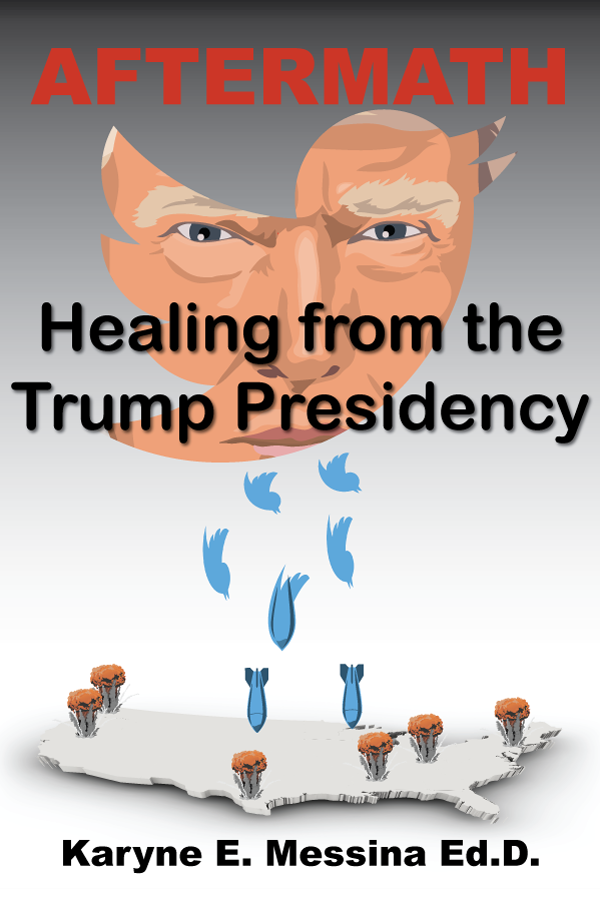 AFTERMATH: Healing from the Trump Presidency

Donald Trump’s behavior is encouraging the development of a generation of people inclined to hateful identity politics and bigotry, while also dismantling our country’s institutions and natural resources. Aftermath is a guide on how we can heal, with ideas on how each of us can help bridge the divide that has only grown deeper since Election Day in November 2016, due in part to the way Trump constantly shifts blame. This behavior is known in psychoanalytic circles as projective identification, a phenomenon people employ who unconsciously dislike something about themselves. Instead of taking responsibility, they blame those feelings, thoughts, or actions on others. Trump is an expert at this, and it’s hurting all of us.

To heal will take time, patience, and a willingness to take stock of our viewpoints and square them with divergent ones. It’s not so unusual anymore for families and friends who find themselves on opposite ends of the political spectrum to refrain from engaging in any sort of meaningful conversation for fear that such discussions will ruin already fractured relationships. It shouldn’t be that way.

Though rooted in psychoanalysis, Aftermath gets at the essence of projective identification as nurtured by Trump, and how we can combat its prevalence in order to once again engage in thoughtful, meaningful debate with those on opposite ends of the political rainbow without resorting to violent rhetoric.

We must demand that our leaders engage in a process that incorporates a respectful way of communicating between and among people. Aftermath shows the way.

Want to learn more about healing the divide in the United States?
Visit Dr. Messina’s website: aftermath-trump.com for more information and helpful ideas.

One comment on “AFTERMATH: Healing from the Trump Presidency”