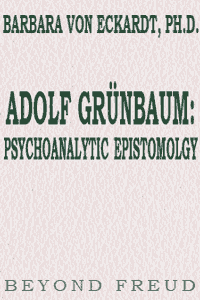 Grünbaum is one of the leading figures in contemporary philosophy of science. Grünbaum’s interest in psychoanalysis is relatively recent. His past work primarily concerned philosophical problems of space and time and the theory of scientific rationality. Since 1976, however, when his first paper on psychoanalytic epistemology appeared, he has produced at least 10 papers as well as a book on the subject, which have succeeded in completely changing the state of the art. The two fundamental questions that Grünbaum’s work on psychoanalysis addresses are these:

1. What sort of standards of assessment ought we to invoke in evaluating psychoanalysis? That is, ought we to regard it as making knowledge claims, and if so, what kind?

2. Given that we have chosen certain standards of assessment, how does psychoanalysis measure up to those standards?